The Middle School students will be restoring a very rare 1971 Attex 300! 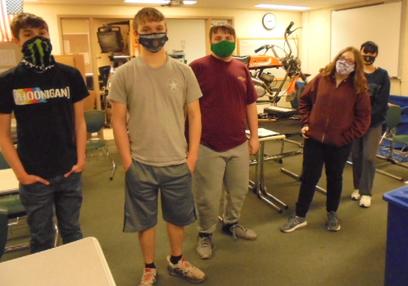 ​Towards the end of last year's school term, Mr. Davis received a phone call from a gentleman named Jerry Vogelhuber.  Mr. Vogelhuber is a graduate of West Branch High School.  He bought his minibike back in 1967. He rode it, his brother rode it, his friends rode it, etc. He had many great memories of riding that minibike. Over time the bike was passed around from family member to family member until one day he received a call from his Mom. His brother had been riding the bike and somehow it caught fire and was no longer rideable. The bike was then disassembled with the idea that it would be repaired. The bike took a back seat to other things and eventually he got the bike back from his brother and put it in the shed behind his house. The bike sat in his shed and collected dust (around 40 years) until he read about Mr. Davis’s CBI students in the newspaper. The next day he called Mr. Davis and asked if his students might want to try to put his old bike back together. Mr. Davis asked him if he would be willing to wait until the next Build-Off so his students could use it to compete with. He agreed and in January 2020 his students entered the 1967 Sears Runabout in the Build-Off. They are very excited and can't wait to see him take a ride on his bike again.

2021 Biker Build-Off Rules
How does participating in the Mini Bike Build-Off Align to the Curriculum?
View on Mobile